Former footballer Stan Collymore has accused Twitter of not doing enough to combat abusive messages after he was targeted by internet trolls.

The broadcaster has retweeted some of the offensive messages he has received since he suggested Liverpool striker Luis Suarez dived to earn a penalty in Saturday's match against Aston Villa.

Staffordshire Police confirmed it was investigating.

Twitter said it took action against targeted abuse that was reported to it.

Mr Collymore, a former Liverpool player who now works as a pundit for radio station TalkSport, wrote to his 505,000 Twitter followers: "In the last 24 hours I've been threatened with murder several times, demeaned on my race, and many of these accounts are still active. Why?"

He later added: "I accuse Twitter directly of not doing enough to combat racist/homophobic/sexist hate messages, all of which are illegal in the UK." 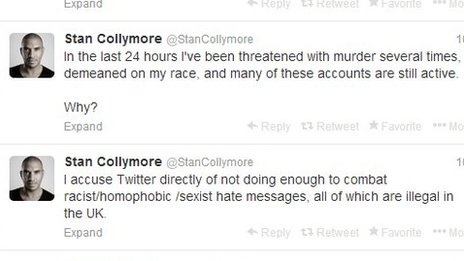 The 42-year-old, whose former clubs also include Aston Villa, Nottingham Forest and Southend United, said Staffordshire Police had been to see him for the fifth time regarding the tweets.

A spokesman for the force said it had been in contact with Mr Collymore on Tuesday evening to "reassure him that we will carry out a thorough and detailed investigation".

He continued: "Our investigation into previous alleged offences is continuing and we are currently liaising with Twitter to obtain subscriber details."

Broadcaster Piers Morgan was also subjected to abusive tweets after he called for the police and Twitter to take action over the offensive tweets aimed at Mr Collymore.

Mr Morgan singled out tweets by some Twitter users then added: "I repeat, racist abuse & death threats both criminal offences in UK. So keep spewing it, trolls, and I will have you ALL dealt with."

Twitter said that while it did not comment on individual users, targeted abuse was against its rules and it had recently made it easier for users to report abuse.

The company has "established processes in place for working with law enforcement" a spokesman added.

In a recent high profile case, a man and a woman pleaded guilty to sending menacing tweets to Caroline Criado-Perez, who campaigned for a woman to appear on new bank notes. They are due to be sentenced on Friday.

The abuse received by both Ms Criado-Perez - which included rape threats - and MP Stella Creasy resulted in Twitter updating its rules and saying it would introduce an in-tweet "report abuse" button on all platforms, including desktops.

Also on Tuesday, Olympic gymnast Beth Tweddle was targeted by some Twitter users as she appeared on Sky Sports News to answer questions about women in sport.

Using the hashtag #sportswomen, some tweets mocked her appearance and others made offensive sexual statements.

Attack in Nice: Many dead as lorry hits crowd

News around the web

Brexit: UK government to host summit on why other countries should join the EU